Paris: Why One Visit Isn’t Enough

I first visited Paris as a starry eyed 14 year old on a month-long European choral tour.

To say that I was blown away by the overwhelming sense of history, culture, architecture and style of the city would be a massive understatement. I had never seen anything so grand or visually stunning on such a huge scale before.

To be honest, I spent my whole month away in utter awe of everything I saw before me. For a girl from Maitland NSW, touring the great cities of Europe was something from a fairytale. It was beyond belief or true comprehension.

In Paris, rounding every corner revealed yet another treasure. I loved the buildings, the gardens, the streets, the Seine, the people, the language. Everything was fascinating – I could not get enough of the history and culture that seems to ooze from every part of this great city.

A formal garden at Versailles

The tropical garden at Versailles

Views of Versailles and some of the parks in central Paris

But of course, it was the Arc de Triomphe, Notre Dame and the Eiffel Tower that swept me away.

It’s one thing to see pictures and watch videos of these iconic buildings. Quite another to literally be in their shadow, breathing in the same air that surrounds them. It is truly intoxicating.

View of the Champs de Mars

View of the Seine

The pictures don’t do the views justice here – but remember this is an 80s camera manned by a 14yo with no photography skills!

It’s no wonder that 10 years later I returned to Paris, with my husband, on our honeymoon.

Nathan and I outside the Louvre in 2000 – gosh we look young there!

And that I plan to introduce my kids to its magic one day as well. We actually have plans to go back in 2020 for our 20th wedding anniversary and can’t wait to share the wonder of the “city of lights” with them too.

Each day I work with this inspiration in front of me:

“Paris is always a good idea…”

The dream of Paris is still very strong – I don’t think I will ever get it out of my system. Because just one visit to this vibrant city is not enough. And that is why I’m determined to return multiple times in the future!

Do you dream of Paris too? Do you agree that one visit isn’t enough? 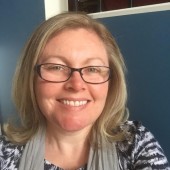 Kirsty Russell has just made the leap from working mum outside the home to working mum based at home. Spurred by a heath scare in early 2014 and the desire to be more present for her kids, she is determined to make the most of this opportunity and is committed to sharing her experiences here. Follow her on twitter at @myhometruths.

Wanna Go – 9 Photos of Croatia to Inspire Your Wanderlust